Over a year ago, the old scholar Moffitt came across documents that predate the current human civilization on the Stormspeake Peninsula.

The documents told of an ancient empire of frogmen, the remains of which are now lost in vine-choked jungle.

Moffitt secure funding, equipment and personnel from King Gomar himself, and set out up the Seddarrin River, to its tangled source.

Moffitt's goal was to locate at least one of the Empire's lost cities secure as many artifacts as possible, and return.

But that was six months ago. Four months ago, all communication with the expedition ceased.

Two other parties tried to location the expedition, but both went silent.

That is where you come in. You must find Moffitt and bring him back.

But you must prepare for strangeness, violence, and the dangers that lurk in the uncharted jungle... 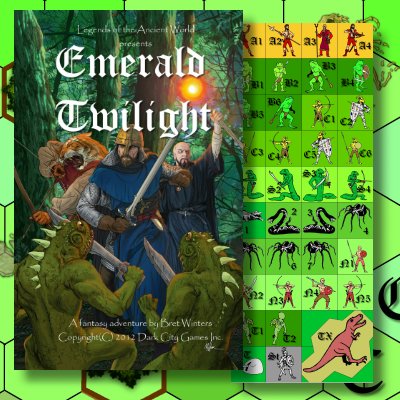 They are designed for solitaire or group play. All components (except dice) are included--the adventure booklet A5 Size, rules , counters and a paper board.

The story changes, based on the decisions you make. When confronting enemies, you play out combat on the playing board with the included pieces (counters).